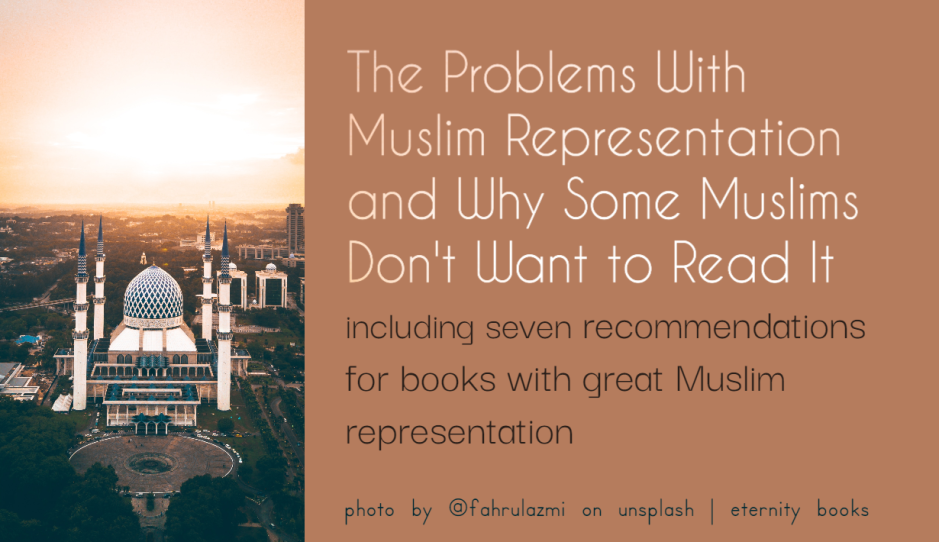 The other day, I was recommending a book with Muslim representation to my sister and she said she wasn’t interested. My dad overheard and was really curious as to why she wouldn’t want to read Muslim rep when she’d read anything else out there.

It was kind of hard to explain. I know why she doesn’t like it, and I don’t blame her for not liking it, but I didn’t know how to explain that.

It’s just one of those things that you just get, you know?

Sigh. Yes, I know, you don’t really know, and that’s why I’m going to try and articulate what the problem is with Muslim-rep books out there.

note: rep is short for representation | YA is Young Adult

I’m always on the lookout for new YA books with Muslim representation to read. Seeing my religion in books, being able to relate to the struggles that Muslim main characters face, it makes you feel good and excited.

It’s like reading a YA contemporary about the troubles of high school. It makes you smile to be able to relate to what these teenagers are going through.

Now, granted, you may not have gone to a normal high school (or even be in high school yet), so you don’t relate to those troubles all the way, but you get the picture.

It’s very easy to relate to and understand something you deal with everyday.

That’s how Muslim rep is to me.

Personally, I like to look for Muslim rep that’s YA, which means that 99% of the time, there’s going to be some romance element in it, which I’m totally fine with. It actually makes me more interested if there’s a romance because I’m curious to see how it will be handled.

Honestly, it’s almost rare that I finish a Muslim YA book and give it five stars. Actually, I haven’t given a Muslim YA book five stars since 2019, and even that one, I really need to change that rating because based on what I remember, I was being very very very generous with it. (it should have been a 3 or a 2.5)

But what exactly makes me, and others, so disappointed?

#1: When the character is Muslim in name only

Look, I’m not one to judge. You may be at a certain point in your religious journey, and it’s not my job to judge you for not “acting” Muslim, or Muslim enough.

But when a book uses Muslim in it’s blurb, when a book mentions that it’s Ramadan, I expect to see some sort of representation for that. If the character is not religious, then please, PLEASE don’t tell me that the character is Muslim or use it to market the book. It’s not a Muslim YA book anymore, it’s just a YA book.

A perfect example of this is The Lines We Cross by Randa Abdel-Fattah. When I read this book, I’d already read Abdel-Fattah’s Does My Head Look Big In This? and I was okay with the representation in that so I was curious to see what TLWC would have to offer.

In the summary for TLWC, Mina is described as “a Muslim refugee from Afghanistan”. Imagine my delight when I saw those four magical words. I instantly borrowed it, excited to see how Mina’s beliefs and culture would play a role in this book that discussed the politics of immigration and refugees in Australia.

Save for one instance in this 400 page long book, Mina’s faith is never mentioned or talked about. And even in that one moment, the topic was just brushed off and everybody continued on their merry way.

I actually checked at one point to make sure that I hadn’t just assumed that Mina was Muslim because she was a refugee from Afghanistan; that’s how much the book was lacking in that regard.

Suffice to say, I was terribly disappointed and couldn’t even acknowledge or remember how the political discussion ended.

Please do not market your book as Muslim YA when being Muslim has nothing to do with the main character besides being the source of their name. Thank you.

#2: When the character is Muslim, but changes because of a boy

This one is marginally better than the above since there is some representation with the Muslim main character, usually in the form of the main character wearing a hijab.

But you know, now that I think about it, maybe it’s not so much better.

Basically what happens in this scenario is that Muslim girl wears hijab and is actually religious. She’s not allowed to date, but she does have a crush on this white boy at school. From what I’ve read and seen, one of two cases happens here:

a. she knows she shouldn’t, but dates the boy anyway

or b. she knows she shouldn’t, but she shares some Moments with the boy anyway before she maybe finally does tell him no.

I haven’t personally read Case A but I have read reviews that have mentioned things like that happening. I’m going to use Yes No Maybe So by Becky Albertalli and Aisha Saeed as an example for this.

According to May, the main character Maya had a conversation about romance and dating with her mother and it was all nice and fine…until she and Jamie (the love interest) had a fight and she didn’t seem as convinced about it anymore. But that’s okay, at least it’s not like she brushed off her views completely right? Apparently she missed Jamie so much, it didn’t matter that she knew it was wrong/believed that it was wrong earlier, she proceeded to make out with Jamie.

I lost every shred of curiosity I had for this book when I read that. I just, I can’t, it’s so. frustrating. to hear that that actually happened. Why couldn’t she stand up for what she believed in? Why does the boy have to trump everything??

I have to say thank you to May though for suffering through this so that future people like me can be forewarned.

For Case B, I want to point out Saints and Misfits by S.K. Ali. This book wasn’t bad, and I think I enjoyed it back when I read it, but the hijab and boy aspect could have been handled better in my opinion.

There’s this one specific scene that I remember where the main character took off her hijab and curled her hair because of a boy that she had a crush on. And I don’t remember it being properly addressed, which was disappointing.

I think in the end, she did eventually stop and tell him that it can’t work between them, or something like that, but that scene is still stuck in my mind. It was also one of the first Muslim rep books that I read, so I think that’s why it disappointed me as much as it did.

I haven’t personally read this one either, but some of my friends have, specifically from the book More Than Just a Pretty Face by Syed M. Masood.

Apparently, some of the rules in Islam are mentioned in this book (even if they were explained in questionable ways), but they’re never actually acted upon. Which is kind of possibly hypocritical?

My friend also mentioned that there were a lot of bad jokes made by the main character about Islam. It’s also been mentioned that the portrayal of one character who started to get more religious was done terribly where he, in essence, became the bad-preachy-haram-police kind of guy.

As I said, I haven’t personally read this book, but there are so many reviews of it by Muslim reviewers on Goodreads that you can read, namely Noura, May, and Fizah‘s reviews, that explain in better detail what the problematic aspects of this book were.

I didn’t think this actually needed to be said, but apparently it does.

I don’t know about you, but just writing about all these moments where books with Muslim rep have pretty much failed makes me never want to pick up a Muslim rep book again.

If you think about the number of books out there that are like this and the number of times that you’ll have to be disappointed before you find a hidden gem, it’s really not worth bothering to try and read these books at all.

But sometimes, you do find that hidden gem which helps restore your faith in the Muslim representation out there, even if it doesn’t really deserve that.

Not all books with Muslim representation are bad. Yes, most of these better ones are in different age ranges and aren’t so romance centered as Muslim YA, but it is possible to find a good wholesome book with great Muslim rep. You just have to look beyond the boundaries of YA.

Here are 7 of my favorite books with Muslim representation:

Muslim or not, I do hope you give some of these a try, and if you’ve already read them, let me know what you thought in the comments below.

Basically the answer I should have given my dad when he asked “why?” was this:

However, more often than not, a book does claim to be a representation for Muslims but it’s terribly wrong or misleading. It’s even worse when something wrong happens and it’s not addressed properly or respectfully. And it hurts to be disappointed by it, especially when it’s something that is rather clear cut when it comes to Islam.

Maybe the only way to get a book that feels right is to write one ourselves, and maybe one day I’ll do that.

But in the meantime, we still shouldn’t have to be disappointed by the books that claim to be representative of us.

I started out writing this post feeling super motivated to explain what annoys me and others about Muslim rep books. And then I got to the end, and now I’m wondering if I really want to post this. You know, just one of those blogger crises where you’re not sure if what you have to say is relevant, or if you should say it at all.

If you’re reading this, then I obviously did post it, so hopefully everything will go well.

What do you think about everything I said? Is there a type of representation that you relate to that you constantly see being messed up? Have you read any of the books I recommended, and if you so, did you like them? Share your thoughts in the comments below!

23 thoughts on “I Think Muslim Rep Is Important, But I Understand Why Some Muslims Don’t Want to Read It”