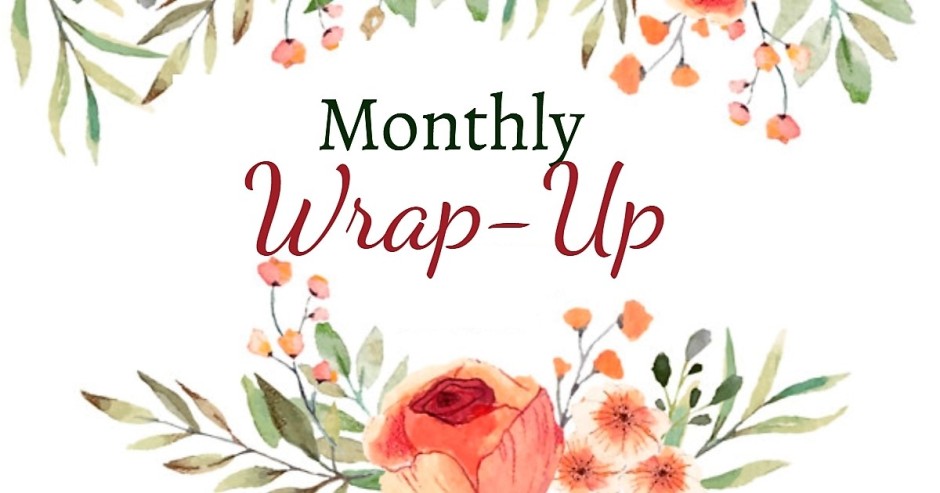 Hey there my amigos! I hope you’re having a great day!! Today, I’ll be sharing my wrap-up post for August 2019!

August marked the beginning of school for me, so blogging and reading wise, things were not good. I didn’t post on time some days, and I’ve done only *hides* 1 review all month. Also, for the past few weeks, I’ve been absent, but what can I say? The school year has started.

Covers are from Goodreads

I only read 5 books, I am behind by 8 books on my reading challenge, and I didn’t pass my goal of reading 8 books that I set in July. *sigh* Oh, and I only did one review.

^Wherever She Goes by Kelley Armstrong // Rating: ★★★☆☆ One sentence summary: An okay mystery, with an interesting main character, and underwhelming ending.

They All Fall Down by Rachel Howzell Hall // Rating: ★★★★☆ One sentence summary: An okay thriller with an interesting plot and an unreliable narrator.

^An Assassin’s Guide to Love and Treason by Virginia Boecker // Rating: ★★★★☆ One sentence summary: A suspenseful novel with great characters and a bit of a predictable ending.

^The Downstairs Girl by Stacey Lee // Rating: ★★★★★ One sentence summary: A phenomenal historical fiction novel with a strong and independent heroine.

^The Diamond Thief by Sharon Gosling // Rating: ★★☆☆☆ One sentence summary: A disappointing mystery with an unbelievable plot and annoying characters.

So, I didn’t do any tags. But not to worry, I did discussion posts so I guess that can make up for it!

Reading Slumps and Ways to Overcome Them

Book Tropes That You Love And Why

Great Posts From Around the Blog-O-Sphere:

HOMESCHOOL MISREPRESENTATION IN BOOKS // DEBUNKING A FEW COMMON LIES by Kelly @ Another Book in the Wall (As a home-schooled kid myself, I’m so glad that Kelly wrote this amazing post!!)

Reading Is My Hobby But Not My Profession // Feeling Fake, Being Torn Between Two Communities, And Other Insecurities by Kay @ Hammock of Books (Kay wrote this incredible post about feeling insecure about her college major, and this is just so important and relate-able.)

AUGUST 2019 WRAP-UP // IN WHICH I REJOICE THAT SUMMER IS OVER by Kat @ Novels and Waffles (This post is all about Kat being her amazing hilarious self. I definitely recommend you go read it!!)

The Third Annual 2019 Book Blogger Awards: RESULTS!! The Official 2019 Winners!!! by May @ Forever and Everly (Please give May a wonderful round of applause for taking the time to host these amazing awards!!! Check out her post to see all the winners!!)

HOW TO GIVE YOUR BOOK BLOG POSTS THAT EXTRA SPARK by Marie @ Drizzle and Hurricane Books (This post is so incredibly helpful and gives tips about how to make your posts look and be their best!)

I started a weekly meme called Let’s Talk Bookish and so far so good. So I just wanted to say thank you guys so much for taking part and reading!!!

In the end, I read 5 books, wrote 1 review, did 0 tags, and 2 discussion posts. 3 of the books I read were either 4 or 5 stars, so that’s amazing, but I’m still behind on my reading challenge.

I only met one of my goals that I set in July, which was to write at least two discussion posts, so yay! However, I don’t think I’m going to set any goals for September because one, we’re already in the second week, and two, I don’t want to pressure myself.

And that’s it for this wrap-up! How was August for you? Did you get as much reading as you wanted done? Are there any discussion post ideas you’d like to share? Let’s chat in the comments below!

Hello my dear ladies and gentlemen! I hope you are having a great start to your week. Today, I will be reviewing They All Fall Down by Rachel Howzell Hall. This was great at parts and boring at others. The plot was interesting and the characters were definitely not what they seemed.

Book: They All Fall Down

It was supposed to be the trip of a lifetime.

Delighted by a surprise invitation, Miriam Macy sails off to a luxurious private island off the coast of Mexico, with six strangers—an ex-cop, a chef, a financial advisor, a nurse, a lawyer, a young widow.

Surrounded by miles of open water in the gloriously green Sea of Cortez, Miriam is shocked to discover that she and the rest of her companions have been brought to the remote island under false pretenses—and all seven strangers harbor a secret.

Danger lurks in the lush forest and in the halls and bedrooms of the lonely mansion. Sporadic cell-phone coverage and miles of ocean keeps the group trapped in paradise. And strange accidents keep them suspicious of each other, as one by one . . .

They all fall down

*Miriam. I really liked how Miriam seemed like an okay person who just did a few wrong things. But by the end of the book, I despised her and half wished that she would pay for her crimes, while I also half wished that she could get a second chance to learn from her mistake. She’s also a very unreliable narrator which made it hard to discern whether she was telling the truth, or she was sugar-coating or lying about whatever she said.

*Plot and Setting. The plot was okay. Slow at the start, but once things picked up, most of it didn’t slow down. There were parts which were boring, and others which were exciting. The setting definitely helped enhance the story and added an extra level of despair for the characters.

*Ending and twist. The ending shocked me, and I don’t want to spoil it by telling why. There was a twist that I did not see coming, and the way things ended was brutal but also realistic. A few people have said that this is like Agatha Christie’s And Then There Were None, but I haven’t read it, and I think that made me enjoy TAFD more since I wasn’t comparing the two.

*Characters and their pasts. I think this aspect was rushed and not done well, especially with Wallace. There was a lot of reveals happening at once, and a bit of info-dumping which helped increase the shock factor, but also took away from the thriller aspect because I spent a few minutes trying to process what I’d just read.

*Miriam’s POV. It was a bit annoying and hard to be in Miriam’s head the entire time because she constantly tried to portray herself as the victim, while she was also not what she seemed. The way that she also only cared about money and was really self-centered made it even worse.

I liked this, I would recommend it, and I hope you enjoy it if you read it! Miriam can be annoying, the plot was at first slow and then a bit choppy, but in the end, the twist and revelations saved the book for me. After reviewing it however, I think I’m going to give this 3.5 stars rounded up instead of 4.

One sentence summary: An okay thriller with an interesting plot and an unreliable narrator.

That’s it for this book review! Have you read They All Fall Down? What did you think? Did you initially support Miriam too? Have you read And Then There Were None? Do you think that I should give Christie’s book a try? Let’s chat in the comments below! 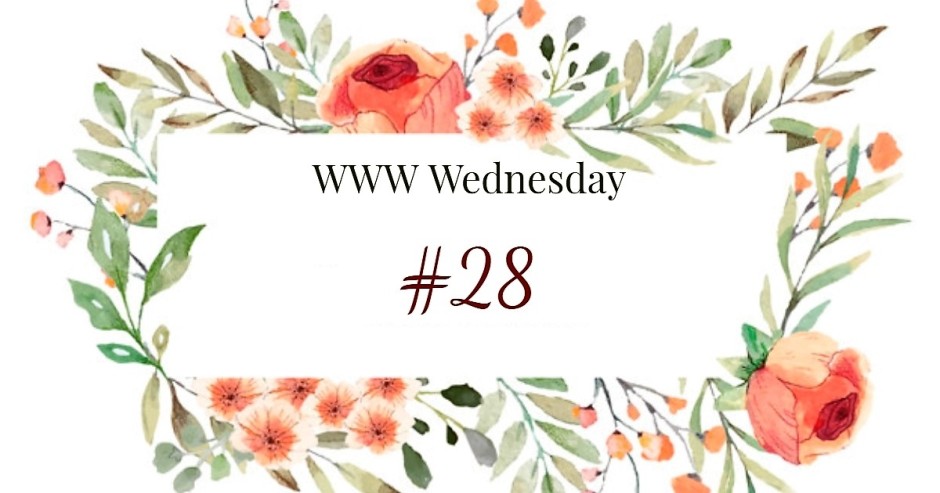 Hello my fellow bookworms!! How are you all doing today? It is time for my weekly reading update, WWW Wednesday. WWW Wednesday is a weekly meme hosted by Sam @ Taking On A World of Words.

The Three W’s are:

All covers are from Goodreads

What I Just Finished:

I finished Wherever She Goes by Kelley Armstrong last week, but as you all probably noticed, I did not do a WWW Wednesday last week so I’m adding it to today’s post. It was okay, a bit cliche, the ending was underwhelming, and I found Bree’s personal drama more interesting than the mystery.

I finished They All Fall Down by Rachel Howzell Hall on Monday, and really liked it! It was at first slow, but then it picked up as the murders started and it was interesting having an unreliable narrator and hearing the true story by the end of the book.

I received a copy of Marshall Law by Paul Kilmartin from Reedsy Discovery. This is my first book from the website and so far, I’m not really enjoying it, but hopefully it’ll get better.

I just started An Assassin’s Guide to Love and Treason today, and so far so good. I’m hooked and really want to find out what happens next!

What I Plan To Read Next:

Um, I don’t know. Right now, I have Crooked Kingdom, Spin the Dawn, The Bookish Life of Nina Hill, and With the Fire on High on hold, so whichever comes in first, I’ll probably read next.

That’s it for this Wednesday. What are you reading? Have you read any of these books? Let’s chat in the comments below! (Be sure to link to your WWW’s so that I can check them out!)

Bonjour and welcome to another Top Ten Tuesday! Top Ten Tuesday is a weekly meme originally created by The Broke and The Bookish, and is now hosted by Jana @ That Artsy Reader Girl.

Today’s topic is: Characters I’d Like To Switch Places With (submitted by Sara @ A Gingerly Review)

However, I’m feeling slightly rebellious today. So instead, I am going to do: 2019 Releases That I’m Still Waiting For

*House on Fire by Bonnie Kistler. I am really really intrigued by that synopsis and I want to know what really happened. Release date: March 12th

*They All Fall Down by Rachel Howzell Hall. It sounds creepy, and full of secrets. I can probably wait another month. Release date: April 9th

*The Lovely and the Lost by Jennifer Lynn Barnes. I’m really excited for this because it is by my favorite author. Release date: May 7th

*Her Daughter’s Mother by Daniela Petrova. First of all, the cover is gorgeous. Second of all, the summary is interesting. Third of all, that should be enough to let you know that this needs to go to your TBR. Release date: June 18th

*Dear Wife by Kimberly Belle. Two women are missing. One ran away, the other looks like she’s come across foul play. I can’t wait for this one (I already have my theories on what’s going to happen, lol) Release date: June 25th

*The Downstairs Girl by Stacey Lee. I can’t wait until AUGUST to get this. I. Need. This. NOW. Release date: August 13th

That’s it for this Tuesday! Are any of these books on your TBR? Any 2019 releases that you’re still waiting for? Let’s chat in the comments! (Don’t forget to link up to your TTT’s in the comments below so I can check them out!)